I was driving the car and heard a backfire up in the carburetor. The car kept running, so I thought, “No big deal.” It wasn’t until I smelled a very strong gas odor that I thought my initial analysis might be incorrect. I pulled into a parking lot and opened the hood

with the engine still running. I noticed a quite heavy and steady “fountain” of gas being spewed out of the back of the carburetor onto the exhaust manifold and engine block. 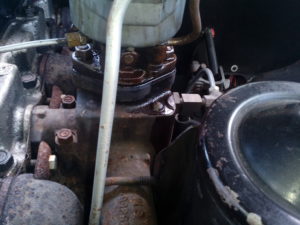 Since I wanted my car to remain drivable and not turn into a weeny roast in the middle of the parking lot, I shut ‘er down.

It eventually decided to stop leaking and I made it home, but I figured the risk of driving it any more without rebuilding the carb just wasn’t worth it. Fresh off my little victory fixing Dixie, I decided to tackle this next project.

I need to preface this by saying my record of taking anything “mechanical” apart and putting it back together is abysmal.  I had a Victory V92C that I asked a buddy to take apart and now I have a bunch of pieces I’m still trying to sell.  I had a CR125 and decided to pull the engine apart.  It, too, did not make it back together.  Friends of mine who know a lot more about this than I do told me I should be able to handle it without any problems.

I decided to look on YouTube and found a video on how to rebuild my carburetor.  The only problem was the guy had rebuilt so many carburetors, that he just ripped the thing apart, threw all the parts in a tub filled with carb cleaner, and then started slapping it back together about as fast as the MicroMachines guy talks.  Not helpful…

So there my carburetor sat on the workbench. 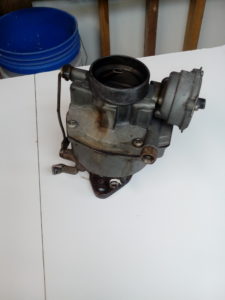 It felt a little like I had pulled the heart out of someone’s chest and just sat there staring at it with a really dumb look on my face.  This would be the point where the surgical assistant panics and realizes I have no idea what to do with the thing.

But fear not!  I bought a Shop Manual… 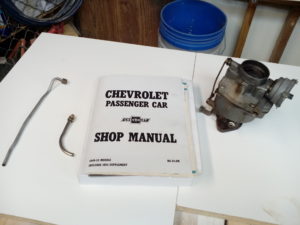 The print quality is extremely poor in the book, but it actually is a great resource… especially if you have an inkling of an idea what you’re doing – which I didn’t.

I started to pull things apart and realized I didn’t have the necessary tools to really do this job well.  I stopped progress, went to the fridge, and acquired the necessary resources. 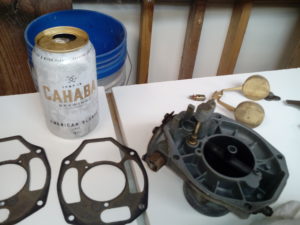 My buddy, Eric Meyer, owner of Cahaba Brewing, has no idea how much of a supporting role he played in this rebuild.

Things continued to progress well until I reached this point…  my “oh, shit” moment. 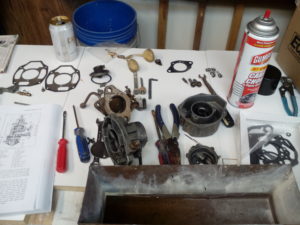 I texted my buddy, Brent Ruggles, who knows more about cars than I could ever hope to know.  His response was, “Just make sure to put it all back together.”  Thanks, buddy.

After another trip to the fridge for reinforcements, I did actually get Humpty Dumpty back together.  I didn’t have the tools or understanding of what needed to happen to make the proper adjustments and set the float, so I had to keep my fingers crossed that the car would actually run after I put the R54’s heart back into its chest.

I got the keys and tried to start it.  All it did was try to start for about 15-20 seconds because there wasn’t any gas hanging out in it.  It needed a little time to fill up again.  On the second try the R54 sputtered to life.  I managed to keep it running long enough to get it warmed up and set my idle speed.  It sounds like it needs to have the points adjusted and the carburetor rebuilt…  But it runs!

Little victory #2!  I think I can get used to this.  The next thing to tackle: 1) replacing the rear main seal; 2) installing suicide doors on the back; 3) adding seat belts… or really any one of the 2 to 3-dozen other things that need to be done.